Not Dead and Certainly Not Pretending: L7’s Anniversary Tour 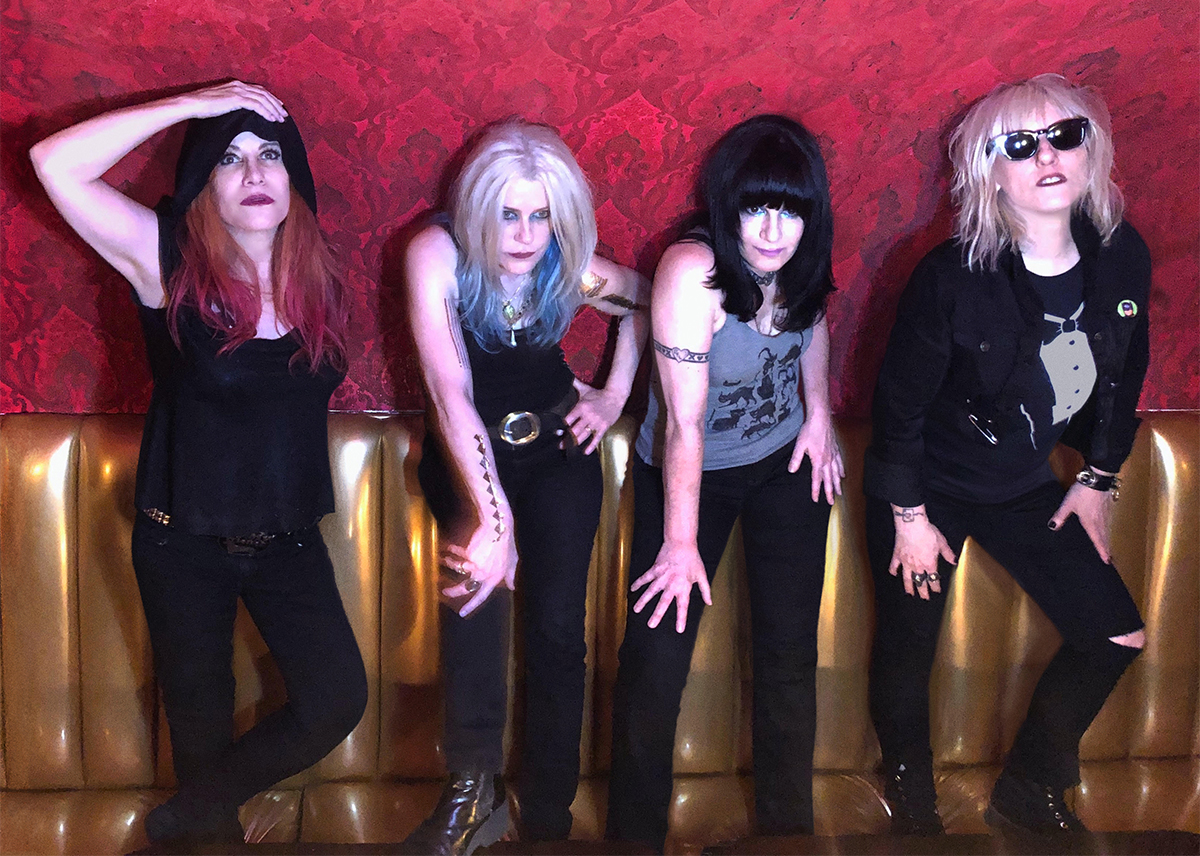 At a time when so many bands are getting back together or touring old material for what seems like nostalgia checks, L7 is doing what they’ve always done: putting on a good show for the sake of the music. Nothing more, nothing less.

My introduction to the band was through Mark Lanegan’s memoir, Sing Backwards and Weep. During the 1992 Reading Festival, both his band, Screaming Trees, and L7 were touring together. He recounts L7’s set, during which the audience grew rowdy and disrespectful, and in return, Donita Sparks removed her tampon on stage and threw it into the crowd. This is, perhaps, the first story people learn when they initially come to L7 – it has become inescapable, emblematic. Their entire history as a band was reduced to a bloody vestige of defiance.

L7 are from Los Angeles and straddle the line between punk and grunge. Their music is certainly entrenched in the grunge aesthetic and sound that is sludge-driven and heavy. However, their sensibilities are punk. Donita Sparks and Demetra Plakas hail from Chicago, while Suzi Gardner and Jennifer Finch are LA natives. Donita moved to LA first and circulated art punk spaces and groups, which facilitated her introduction with Suzi. In time, they met Jennifer and then Demetra, completing the group. After establishing themselves as a band, the buzz around grunge and the music scene in Seattle, as well as Sub Pop records, called them up north.

L7 played the Metro in Chicago on October 15, which is when I saw them for the first time. They are touring their most commercially successful record, Bricks Are Heavy, for its 30th anniversary. Since it is an anniversary tour, they play the album front to back, and of course their most popular track, “Pretend We’re Dead” is number three on the track list. The song showcases what L7 does best: a catchy hook, sludge-driven and distorted guitars, and Donita’s guttural yet melodic singing that somehow remains stoic and contained.

The song showcases what L7 does best: a catchy hook, sludge-driven and distorted guitars, and Donita’s guttural yet melodic singing that somehow remains stoic and contained.

Prior to the beginning of the song, Donita Sparks paused to leverage a threat that fell along the lines of, “if I see any of you motherf*****s leaving after this song, we will chase you down the street. Do you hear me?” and with a biting laugh, the band rumbled into the song. They, of course, didn’t actually have anything to worry about. Everyone remained firmly planted in their spots long after the song was done. I expected the crowd to be filled with fans that have been holding the band close since their heyday, but stood corrected as a good portion of the audience was composed of girls that could be 18 years old. Even walking out of the show, I heard a person remark in shock, “there were literal 19-year-old girls in the pit!”

A couple of songs after “Pretend We’re Dead,” prior to playing “Slide,” Donita again interjected with an introduction, claiming, “Every line in this next one is true. Suzi and I wrote it. We used to know how to pick ‘em back in the day.” This introduction is hilarious and fitting if you know that some of the lyrics include “you pissed in your pants and put out the torch” and “you put your cane into my amp.” Suzi is the one that snarls and growls her way through the song, while Donita serves as the response in this call and response tune, chiming in with “lettin’ it slide” after each more appalling and revealing statement Suzi delivers. The guitar riffs in the song seem to function as a highlight and another layer in the call and response. As is customary, the music is heavy and angry, without committing to exploding into crescendo and mayhem.

When they’re up on stage, it’s clear they belong there. Donita and Jennifer headbang in unison, Demetra’s hair blows about in a way that could only be described as cinematic while she thunders through the set, and Suzi is the definition of cool in her black blazer and shades. It was at this moment that I also realized they are the first all-female band I have seen live. I have been going to shows since I was fourteen. I have been to countless concerts and festivals, yet never in that time had I seen a band composed entirely of women. I have seen women in bands and solo female artists, of course, but never the full band.

It was at this moment that I also realized they are the first all-female band I have seen live.

In their documentary L7: Pretend We’re Dead, released in 2016, the band discusses at large how they hate being referred to as an all-girl group. Countless interviews and questions in the 90s revolved around the gender of the band and how novel it was that, apparently, women could rock! They have done much to divorce themselves from feminine presentation, partly due to this. Though they wore makeup, it was never with an intent to appear more feminine or emphasize beauty. Rather, the makeup is most often applied haphazardly and unconventionally, making it evident that it serves a statement that was an extension of their performance on stage, rather than playing into conventional beauty standards. This strain away from the feminine, paired with the hard music that the band creates, serves as a proclamation of being able to play with the “big boys.” This is a statement that they are not only able to keep up but they also carve their own space on the timeline.

In The Sex Revolts: Gender, Rebellion, and Rock ‘n’ Roll, Simon Reynolds and Joy Press argue that this presentation and their music is merely a reproduction and impersonation of the “toughness, independence and irreverence of the male rebel posture.” That is, though the band positions themselves in the rock oeuvre, seemingly presenting something new, they are just usurping the same signs and gimmicks of the classic “old hardened, repressed armature of cool.”

This is true to a certain extent. Of course, we don’t want to keep recreating the same models again and again. However, it is also necessary and important for women to be able to occupy the same spaces men have, in the same or similar ways, especially in order to move outside of them. In addition to that, the basic element of representation still holds true. The importance of seeing someone that looks like you represented in spaces and across genres is powerful. The proof of their importance is this: that though it has been 30 years since they were at the peak of their popularity and 30 years since the release of Bricks Are Heavy, it was at their album’s anniversary show that I saw a band composed entirely of women for the first time. Though it’s been decades, they are still doing work that needs to be done by creating and playing the music they do in the way that they do it.

The importance of seeing someone that looks like you represented in spaces and across genres is powerful.

One of their encore songs was “American Society,” a cover originally by Eddie and the Subtitles and an emblematic counterculture anthem centering the refrain “I don’t wanna drown in American society.” Donita encouraged the crowd to vote in the upcoming general elections prior to the start of the song. The band has long been political and active in the feminist movement, forming Rock for Choice, a woman’s rights group and concert that raised funds for abortion clinics and legal expenses. They concluded their set with the emphatic “Fast and Frightening,” echoing out on the lyrics “[She’s] got so much clit she don’t need no balls” and walked off stage. On my own walk home, I thought about buying a bass. 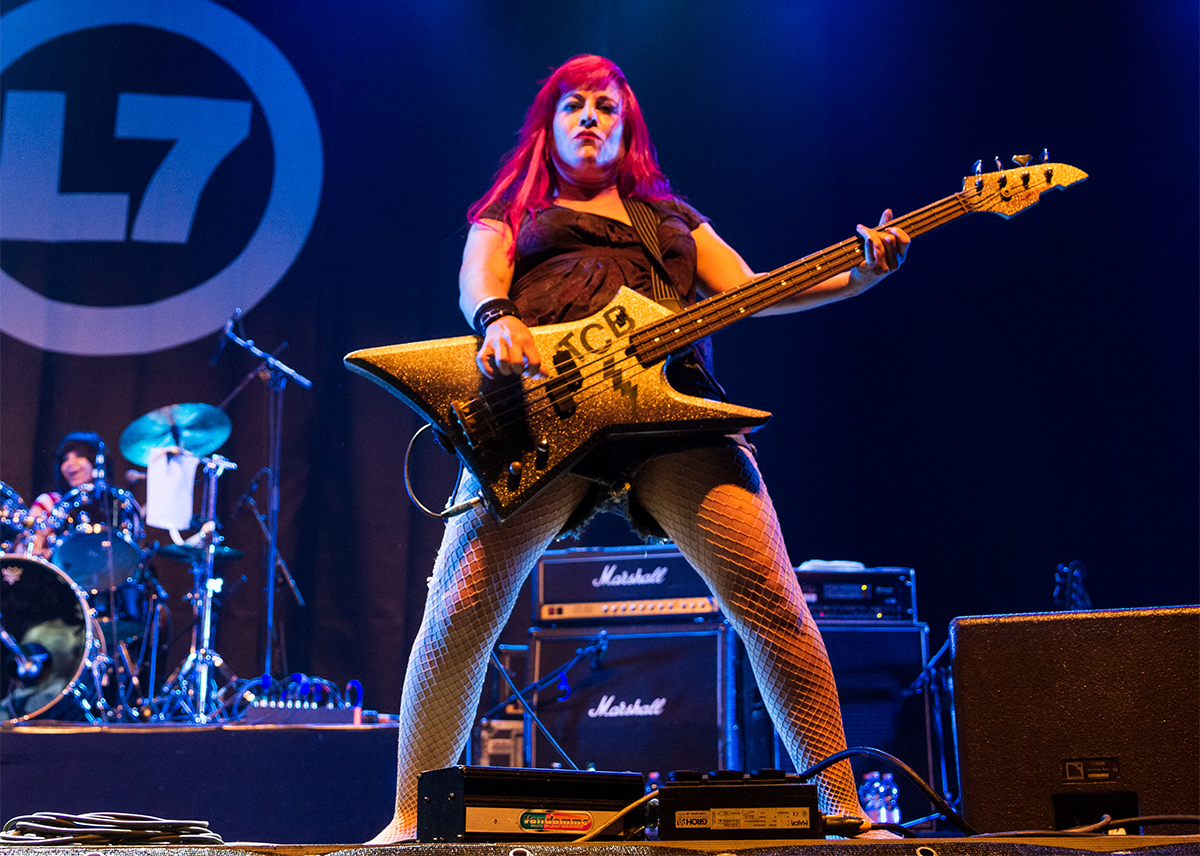 Check out Sing Backwards and Weep by Mark Lanegan.

Visit Spin Magazine to read an interview with the band from 2019. 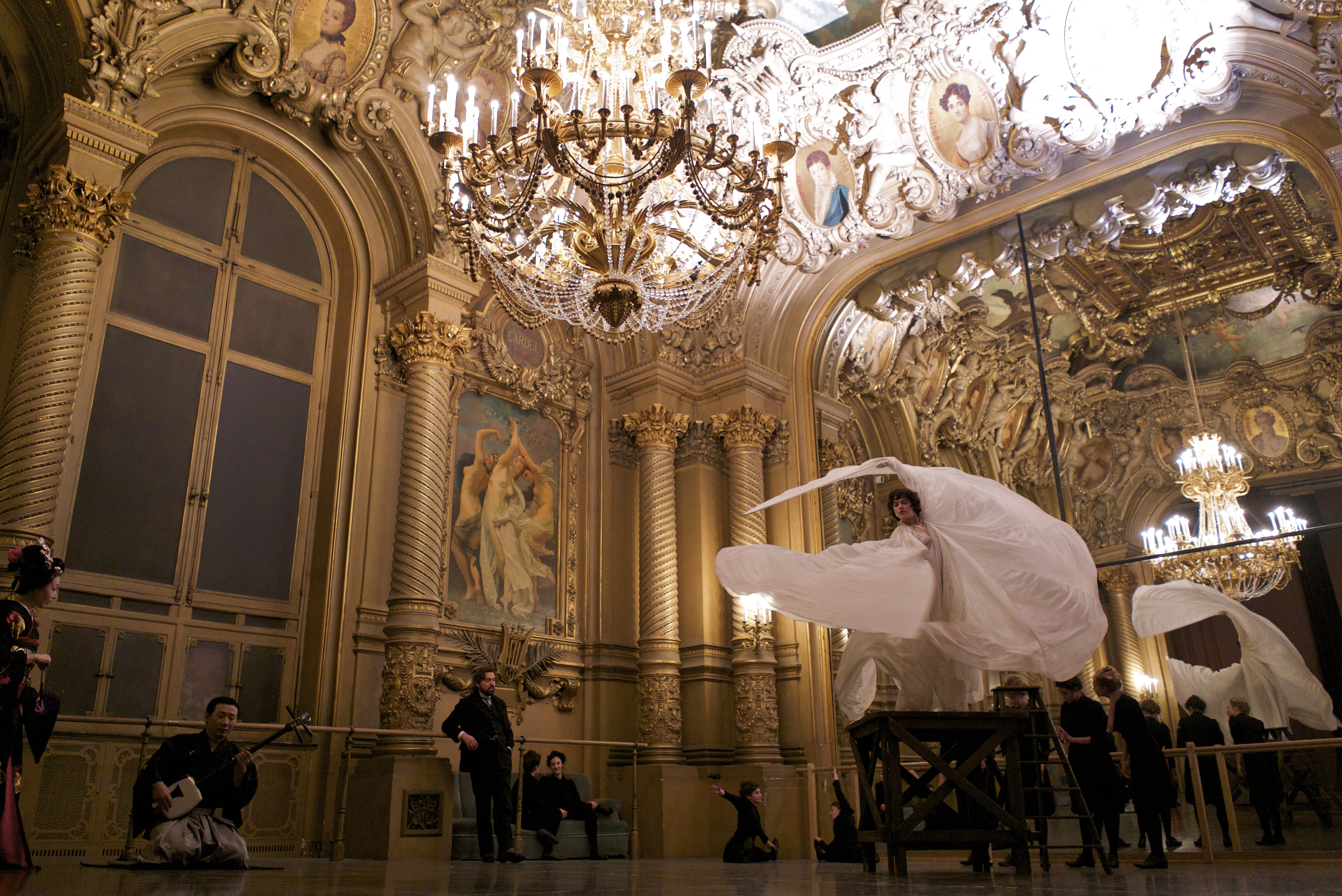 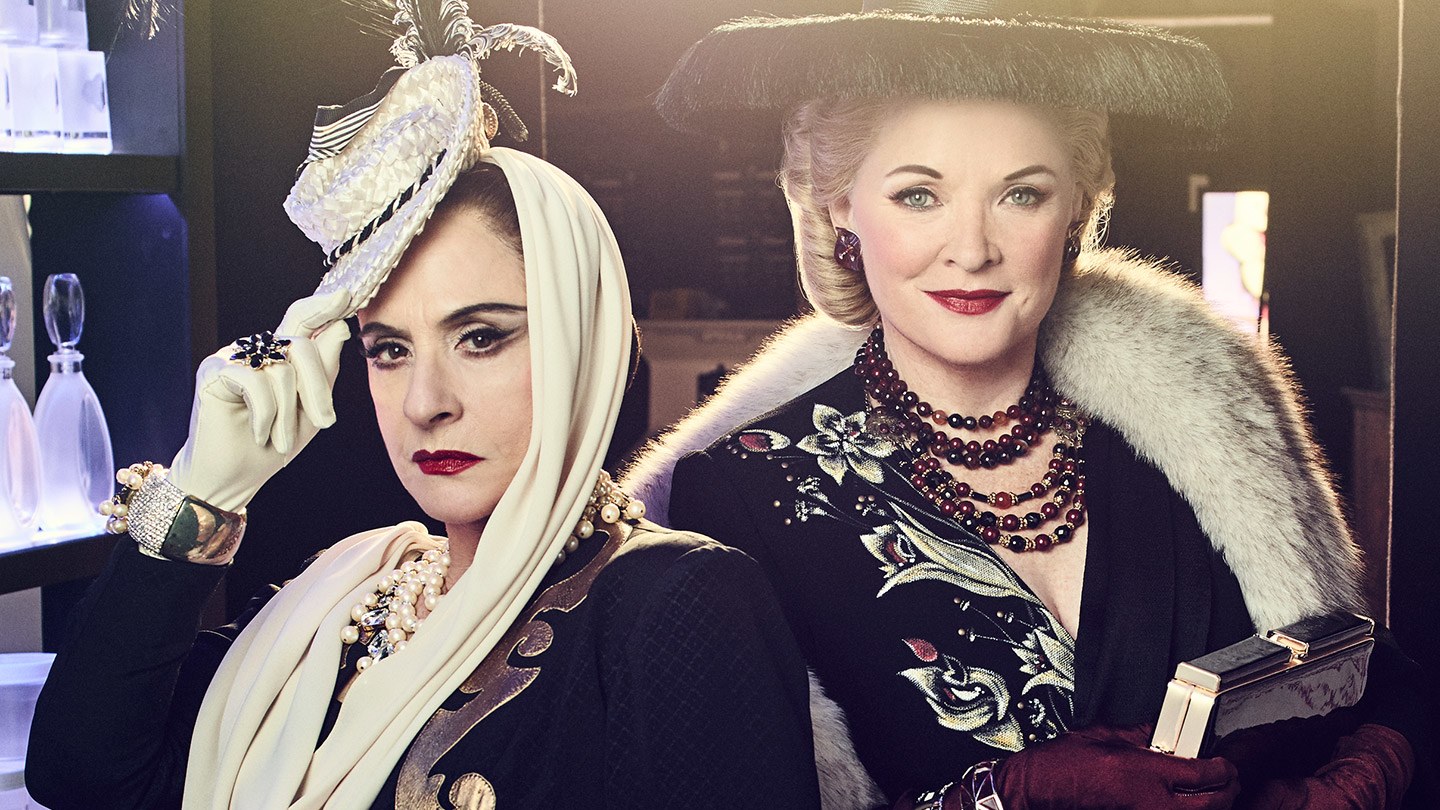 by FF2 Guest Post November 11, 2022
FF2 Media welcomes Guest Posts from writers who self-identify as women. Do you have a passion that you want to write about? Send us a pitch: witaswan@msn.com. We pay experienced writers $100 for each post (of approximately 1,000 words per post). We also need interns for administrative back-up. Compensation for interns begins at $15 per hour.
Previous Post Next Post