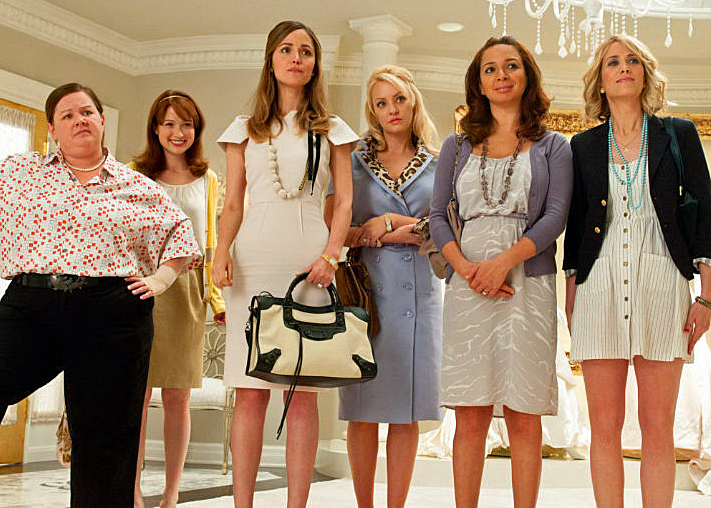 As part of our 10th– anniversary tribute to the modern comedic classic Bridesmaids, Roza Melkumyan explores the filmography of its costume designer, Leesa Evans, who has costumed and collaborated with some of today’s funniest female comedians!

And, in honor of this 10th anniversary, Fathom Events is presenting this favorite flick on June 6th, 9th and 10th —  see if it’s playing in your city and get tickets here!

Far from the first wedding comedy to debut (and far from the last, I suspect), Bridesmaids (2011) made waves with its successfully executed female-driven plot. Co-written by Annie Mumolo and Kristen Wiig, Paul Feig’s directorial debut is a comedic force. Then-regulars on Saturday Night Live, Wiig and Maya Rudolph delivered hilarious performances in their respective roles as best friends “Annie” and “Lillian,” while Melissa McCarthy knocked it out of the park in her breakout role as the self-made, sex-driven, and self-assertive “Megan.”

With these fiercely funny ladies fronting the film, it’s easy to forget about all the other elements that come together to make a piece of art both funny and impactful. But among various award nominations and wins for the film, its actresses, and its screenplay, there shines another fierce female: costume designer Leesa Evans. Along with Christine Wada, her work on the film garnered a nomination for Excellence in Contemporary Film at the 2012 Costume Designers Guild Awards.

The daughter of a couture designer, Evans was raised in and around the fashion industry. Now a prolific costume designer and stylist, her credits include over 30 films, like the iconically costumed Clueless (1995), and standout comedies like Bridesmaids, Forgetting Sarah Marshall (2008), Get Him to the Greek (2010), Neighbors (2014), and 22 Jump Street (2014).

In addition to Wiig’s Bridesmaids, I’d like to focus on Evans’ work in two other female-driven, female-written comedies, Amy Schumer’s Trainwreck (2015) and Ali Wong’s Always Be My Maybe (2019). Working with the gifted female comedians who spearhead these hilarious films, she builds wardrobes that highlight each character’s unique personalities and reflect their personal journeys through confidence and comfortability.

Let’s start with Trainwreck. Directed by Judd Apatow and written by Amy Schumer, this romantic comedy focuses on a promiscuous young magazine writer – “Amy” (Schumer) – with a penchant for alcohol and a rock-like resolve to never commit to a serious relationship. But her perspective changes when she finds herself falling for an orthopedic surgeon named “Aaron” (Bill Hader).

At the end of the film’s first sequence, Amy finds that she’s accidentally broken her cardinal rule: she spent the night at the house of a “hook-up.” As she stumbles down the street in her gold tube skirt and red heels from the night before, we can’t help but laugh. Here, it’s important to note that in costuming for comedy, a designer must consider when the clothing must be louder, add to the comedic effect, or be inconspicuous so that the comedic dialogue of the scene can speak for itself. Amy’s “walk of shame” is funny to watch because of how out-of-place she is, squinting at the morning sun in some suburban neighborhood in Staten Island as she tries to balance on those heels. No dialogue is needed; the costume makes the comedy.

Amy always looks just a little off in comparison to the people around her. In an interview with People, Evans explains that she and Schumer talked a lot about “what it meant to be a ‘trainwreck’” and how that might be portrayed in the clothes that Amy dons. At a baby shower in the suburbs, her low-cut dotted dress is a little more revealing than the cardigan ensembles of her peers. At work, her skirts and blazers are just a little less tailored than the structured blouses of her boss, “Dianna” (Tilda Swinton).

Still, I love Amy for dressing the way she wants. She might not always have her life together, but she is confident in her body and in her sexuality, and that is refreshing to see. She doesn’t care what people think of her lifestyle or her fashion choices. While maintaining that sense of unwavering confidence in her body, Amy’s clothes do change in small ways that reflect her struggle to accept her love for Aaron. As she finally eases into a steady, loving relationship, she starts wearing soft sweaters and florals while breaking out the sexy dresses for date nights.

As we learned from Trainwreck, costumes make confidence or at least reflect it. And nobody is more confident than Ali Wong’s “Sasha,” who rekindles a romantic relationship with childhood friend “Marcus” (Randall Park) in Always Be My Maybe. It isn’t just Marcus that she realizes she’s missed. Having left San Francisco years ago to pursue her dreams, the celebrity chef returns to open a new restaurant and finds herself falling back in love with her old home and her old, fame-free life.

The opposite of a trainwreck, Sasha’s got everything going for her. She loves her work as well as the high-profile, trendy lifestyle she lives. At the beginning of the film, she poses for the press in an angular red gown, red lipstick, and a high ponytail. She emanates an edgy sophistication, the essence of which remains in her fashion choices throughout the film. Again, Evans actively works with Wong in creating Sasha’s wardrobe, choosing pieces with angular, architectural shapes and bold colors and patterns to highlight the character’s strength and sense of purpose. She isn’t afraid to go after what she wants. Her pointy style also compliments Wong’s real-life signature cat-eye glasses, which becomes a part of Sasha’s look as well.

Much like Amy, Sasha does not care to change her life. Still, as she finds herself reconnecting with her parents and relaxing into her old San Francisco life, the shape and color of her clothing do, too. She wears trendy, comfortable tees, cardigans, and dresses in her signature red, while adding in softer shapes and colors like pink and white. A little less controlling but still focused and motivated, Sasha finds balance – with the help of Marcus, of course.

In contrast with Sasha’s fitted angles and edge, Marcus wears shapeless, comfy clothing like joggers and t-shirts. While Sasha shines in reds, Marcus prefers blues. Having played gigs with his band on the same block for a decade, Marcus doesn’t like change; it makes him uncomfortable. If Marcus helps Sasha relax, then Sasha pushes Marcus to venture out of his comfort zone.

Always Be My Maybe takes the costume comedy of Trainwreck and turns it up a notch. On a double date, Marcus overdresses, wearing an old velvet maroon tux he probably hasn’t worn since high school prom. Later, when Marcus attends a red carpet event with Sasha, he shows up in a t-shirt and loose pants, now underdressed. Not allowed to enter without a jacket, he borrows one. Oversized and shabby, it hangs awkwardly on the already uncomfortable Marcus.

But nothing screams uncomfortable like that ridiculous wedding dress from Bridesmaids. A mess of ruffles, frills, and feathers, Lillian’s wedding dress is an example of couture gone crazy. In distancing herself from Annie and becoming closer to the fashion-forward, filthy-rich Helen, Lillian finds herself entrenched in high society and style, lace and pearls, and Paris-themed bridal showers complete with puppy party favors and a chocolate fountain. Lillian hasn’t only lost sight of Annie; she’s lost sight of herself.

And we, quite frankly, have lost sight of Lillian in that pompom of a dress. Luckily, Annie is there to help de-frill, and bring Lillian back down to Earth. While the altered dress still isn’t my favorite, I love the way Evans plays with its costuming. She demonstrates, yet again, how clothing can reflect a character’s sense of balance.

As Annie and Helen compete for Lillian’s affection and praise, we see two deeply insecure women play at confidence. It might not seem this way initially, as we only get a closer look into Annie’s psyche. Clearly intimidated by Helen and her lacy black gowns, structured cocktail dresses, and beige, ruffled blouses, Annie seems to cower in her navy blazers and cotton sundresses. Having already lost her bakery to the Recession and her boyfriend along with it, Annie is terrified of losing Lillian too. To her, Helen has everything she doesn’t: money, security, sophistication. It isn’t until later that we realize that Helen herself is actually quite unhappy in her marriage and lonely in life. In the meantime, she does everything in her power – aided by elevated clothing – to make Annie feel inferior.

The main characters of Bridesmaids spend most of the film finding the confidence that both Amy and Sasha already have. While the film is centered around Annie and Lillian, we can’t forget their hilarious ensemble cast of bridesmaids. Along with the classy Helen, there’s the brash Megan, naive newlywed “Becca” (Ellie Kemper), and the sardonic married mother “Rita” (Wendi McLendon-Covery). In becoming Lillian’s bridesmaids and donning those plum-colored, chiffon Fitz Bernaise confections, they must come together to support the bride-to-be. Thanks to Evans, their costumes reflect that sense of unity.

Featured Photo: The bridesmaids get ready for a dress fitting | Bridesmaids (2011) | Suzanne Hanover 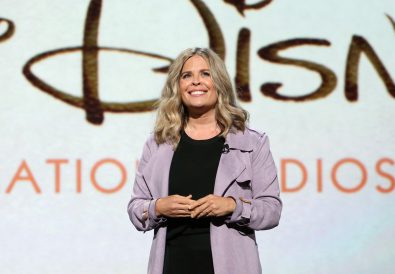 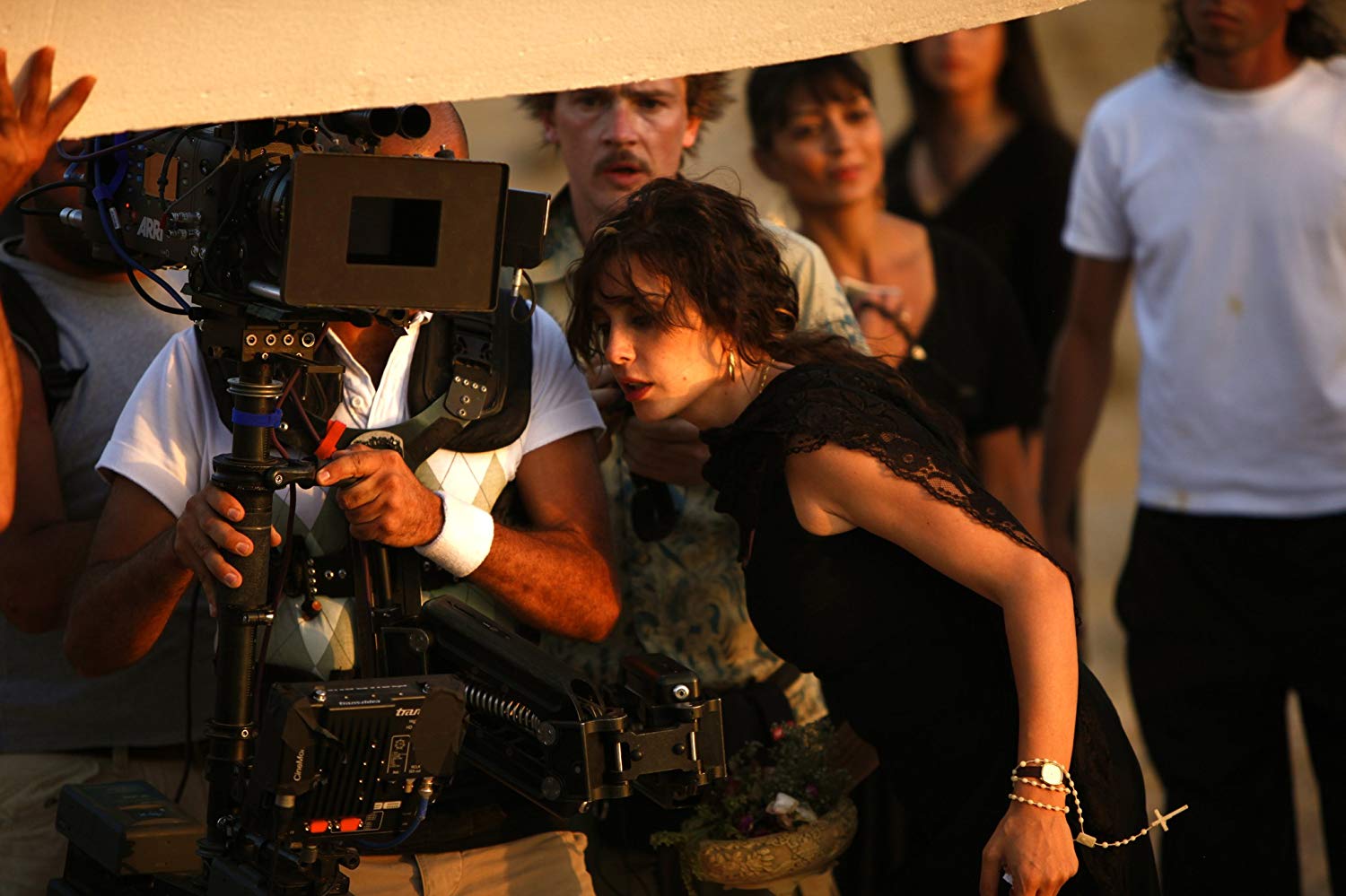 by Roza Melkumyan June 1, 2021
As a member of the FF2 Media team, Roza writes features and reviews and coaches other associates and interns. She joined the team as an intern during her third year of study at New York University. There she individualized her major and studied narrative through a cultural lens and in the mediums of literature, theatre, and film. At school, Roza studied abroad in Florence and London, worked as a Resident Assistant, and workshopped a play she wrote and co-directed. After graduating, she spent six months in Spain teaching English and practicing her Spanish. In 2019, she spent a year in Armenia teaching university English as a Fulbright scholar. She has continued to live in Armenia, and loves every second of it. Her love of film has only grown over the years, and she is dedicated to providing the space necessary for female filmmakers to prosper.
Previous Post Next Post