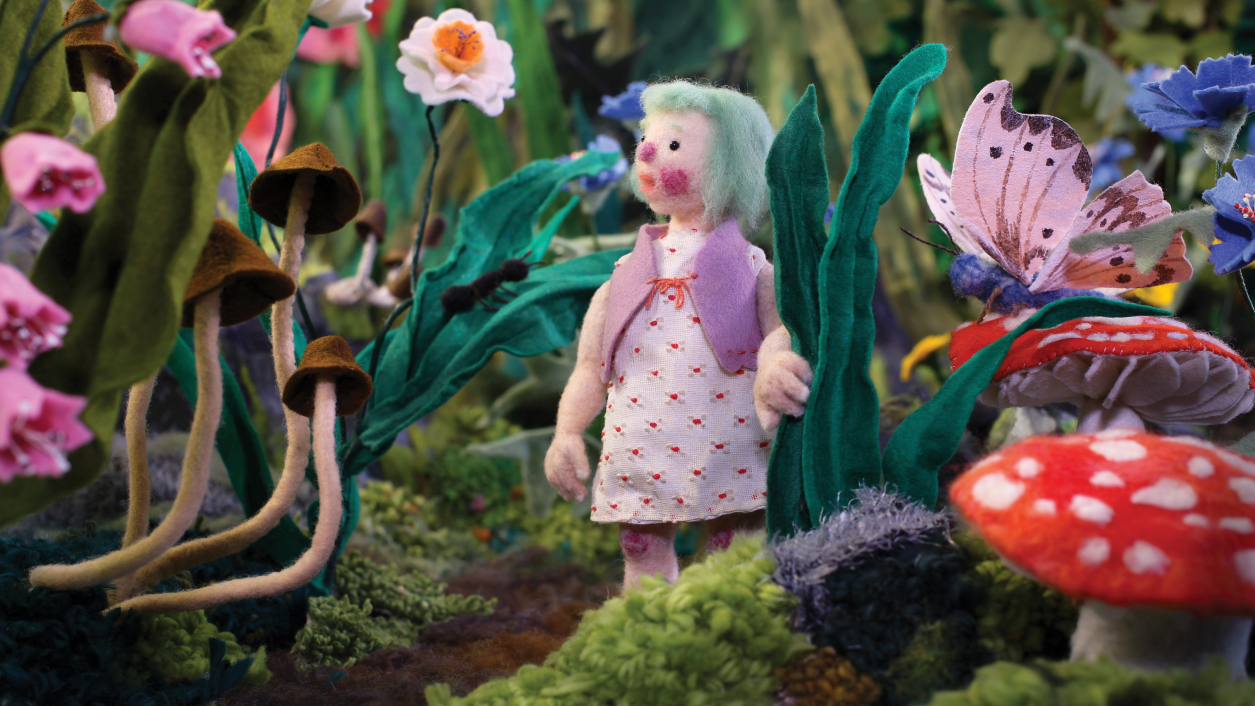 Tulip is a “woolly” stop-motion short film adapted from Thumbelina by Andrea Love and Phoebe Wahl. It chronicles tiny Tulip’s journey through a whimsical forest world as she endeavors to make it back home before dawn. I was fortunate enough to catch up with co-director and co-executive producer Andrea Love about her latest projects, animation, and needle felting at large.

DH: It seems like Tulip was really well received at film festivals even though it premiered this spring during the pandemic. Were you expecting such enthusiasm given the state of the world?

AL: We are thrilled that Tulip’s premiere has been such a success.  After working on the film for over a year, it was very cathartic to see Tulip get out in the world.  We wish we could experience the magic of in-person festivals, but I am thankful that we are able to reach an even broader audience, given the current virtual nature of film festivals.  I think it contributed to the initial success because there are many people across the globe who have been following Tulip’s progression and have been waiting to see it for a long time.

DH: What initially interested you (and co-director Phoebe Wahl) about the story of Thumbelina? Why did you decide to recreate it through wool?

AL: Phoebe and I connected through a mutual friend, and clicked right away.  We knew we wanted to work on a project together. Adapting Thumbelina has always been a dream for Phoebe, and we thought it would be a great place to start our collaboration.  From a story perspective, there are so many fun characters and narratives to play with.  But as the original story is almost 200 years old, there were some problematic themes and elements that we felt needed to be reworked or eliminated altogether.

I am known for my needle felted animation work, and it was very important to me to prominently feature the fiber.  Both Phoebe and I love the woolly aesthetic and it lends itself very well to the whimsical fairytale world, as well as stories that take place in the natural world.

DH: When I saw Tulip for the first time, I was overjoyed. Why do you think it resonates so deeply with people?

AL: It has a lot of heart.  Kid’s entertainment can oftentimes be very fast-paced and chaotic.  But I think there’s a growing interest in films that take their time and let people get lost in the world a little more. We wanted Tulip to be gentle and soothing, kind of like a bedtime story. There is also something comforting about a familiar story, which is one of the reasons we wanted to do an adaptation.

DH: What was your process for creating some of the characters?

AL: Phoebe sketched out character designs, I built the puppets by needle felting over wire armatures, and Phoebe made the costumes.  It was a lovely collaboration that fused our two styles together in this very beautiful way.  One of the great challenges of this project was the issue of scale because Tulip is supposedly only a couple of inches tall. In order to sell her size to the audience, we ended up making multiple puppets on two different scales.

DH: There are a few mesmerizing scenes involving water. How did you manage to recreate the properties of a pond with wool?

AL: I have been working on my water technique for a while.  It is one of the things that wool can do so well, but at the same time, it is very difficult.  The most important part is that all the elements of the water are moving in some way. If a piece of wool sits completely still while the wool around it is moving, then it can ruin the effect.  Sometimes that means just lightly brushing it with a felting needle to slightly alter the top wisps, or it can mean dragging/stretching it a bit to create more of a wave.  I find that the more the water is moving, the easier it is to animate.  So a big wave or a river would be easier than a pond, because pond water is quite stagnant, so it requires more subtle movement. 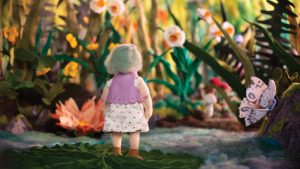 DH: The color palette is remarkable. How did you decide what colors and textures to use to make the world come to life in such a whimsical way?

AL: We had a lot of fun putting the color palette together.  The driving factor for the color was often what wool options we had.  It was very fun to put different wool, felt and yarn samples together and see what combinations caught our eye. Phoebe’s illustrative style is very detailed.  And my animated worlds are also packed with tiny details.  So, it was a natural decision for us to go with a very dense and lush aesthetic. We wanted the fiber to be the main attraction, but we juxtaposed it with some other materials like papier-mâché and painted foam props.

DH: What was the most challenging scene to animate?

AL: There is a party scene at the end with several puppets– there’s dancing and puppets everywhere.  It had to be heavily choreographed and meticulously planned.  The other challenge was animating big puppets, like the life-size old woman bust.  I had never built large puppets like that before, and I discovered a lot of things in the process that I would have done differently.  They were tough to animate, but oh-so-satisfying to see come to life.

I was pregnant during animation, so it got more and more challenging as I got bigger.  I made sure to tackle the party scene early on in my pregnancy and leave the less taxing animation for later. Somehow (obsessive planning, and long hours) I managed to wrap up animation two weeks before the birth.

DH: Where will Tulip go next? Where can people see it?

AL: Tulip is having its international premiere at Annecy in June. And it’s got into a couple of other festivals we can’t announce quite yet. We will be continuing on the festival circuit throughout the year, and then exploring our options for distribution.

DH: How did you initially get into needle felting?

AL: I started needle felting almost 10 years ago, right around the time I started getting more serious about animation.  I first tried it out as a method for puppet building and very quickly became obsessed.  Not only does it work amazingly well in animation, but it’s just a really fun craft. The repetitive poking motion is a great way to calm the nerves, and I’d go so far as to call it meditative and therapeutic.  I definitely recommend needle felting to anyone who is looking to experiment with a new craft.

DH: What does needle felted wool offer that other mediums do not?

AL: Wool is so versatile.  I like to compare it to clay, in that it is this moldable raw material.  But unlike clay, it is very light, so it won’t weigh down your armatures.  It won’t melt under hot lights or the heat from your hands. It holds up really well over time, unlike some other popular puppet building materials.  And it’s great for particle effects like fire, water and smoke.  Another nice perk is that the wool can be reused as long as it is not too tightly felted.  Much of the wool that I use for ground material and backdrops will be recycled into my wool collection for future projects.

AL: My Cooking with Wool series has been an ongoing personal project over the past year and a half.  It is a fun, low-stress way to explore something that we all can relate to–cooking and/or eating food.  It taps into people’s fascination with miniature things and adds the extra twist of being out of wool. People describe them as soothing and relaxing.  I like being able to create feelings of calm for my audience. I have a hungry fanbase that loves when I come out with new cooking videos, and that has been a great motivator for me to continue making them.

AL: I animated Bagel Breakfast over the course of 2 days.  And since my felted kitchen has already been built, that cuts down on the time commitment for making these cooking films. It took me about 15 minutes to felt the miniature bagel.  But then I had to destroy it when it went into the toaster because it couldn’t fit into the slots.  So I had to make a second miniature bagel for when it popped out of the toaster, and I had the challenge of making it look like it had been lightly toasted.  But I think the effect worked.

DH: Do you have any advice for folks interested in learning how to needle felt?

AL: I would buy a starter kit online (or at your local yarn store), and watch a YouTube tutorial. Needle felting is a very simple concept and can be picked up very fast.  There are lots of fun beginner projects out there using simple shapes and techniques.  . .  just be careful not to poke your fingers. Felting needles are sharp, so it’s not the best craft for super young kids.

DH: What is next for you?

AL: I am newly represented in the commercial sphere.  I am on Hornet’s director roster in the US and Canada.  And I am represented by Curate Films in the UK and Europe.  I am hoping to balance a little commercial work with my personal projects, all the while managing Tulip’s film festival circuit, and enjoying some long overdue visits from family.  It’s shaping up to be a very busy year! 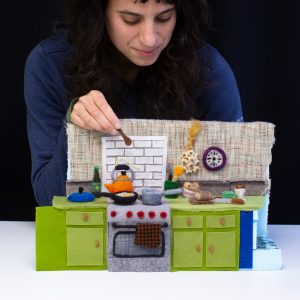 Andrea Love is a Washington-based animator and fiber artist. Her work has been screened at festivals including the Tribeca Film Festival, the LA Shorts Fest, and the New York International Children’s Film Festival. Andrea’s work can be found here:

More information about Tulip can be found here: https://www.tulipanimation.com/

Many thanks to Andrea for her photographs and time! 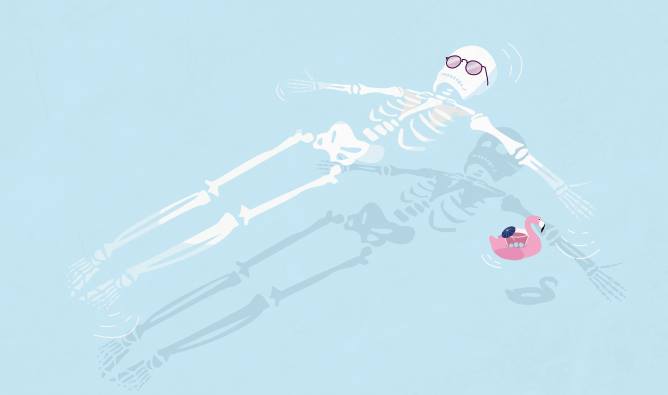 Miranda Tapsell gets the rom-com right with ‘Top End Wedding’

by Dayna Hagewood May 18, 2021
Dayna graduated from Rutgers University in May of 2019 with a degree in English and Cinema Studies and a concentration in Creative Writing. Dayna loves working with FF2 Media because writing about film harmonizes her greatest interests and allows her to participate in showcasing women artists doing amazing work. As a writer, film buff, and avid cross-stitcher, Dayna appreciates that FF2 carves out a space for women artists in an industry so unwilling to lend one to marginalized groups. She is proud to aid in creating and facilitating that necessary space.
Previous Post Next Post