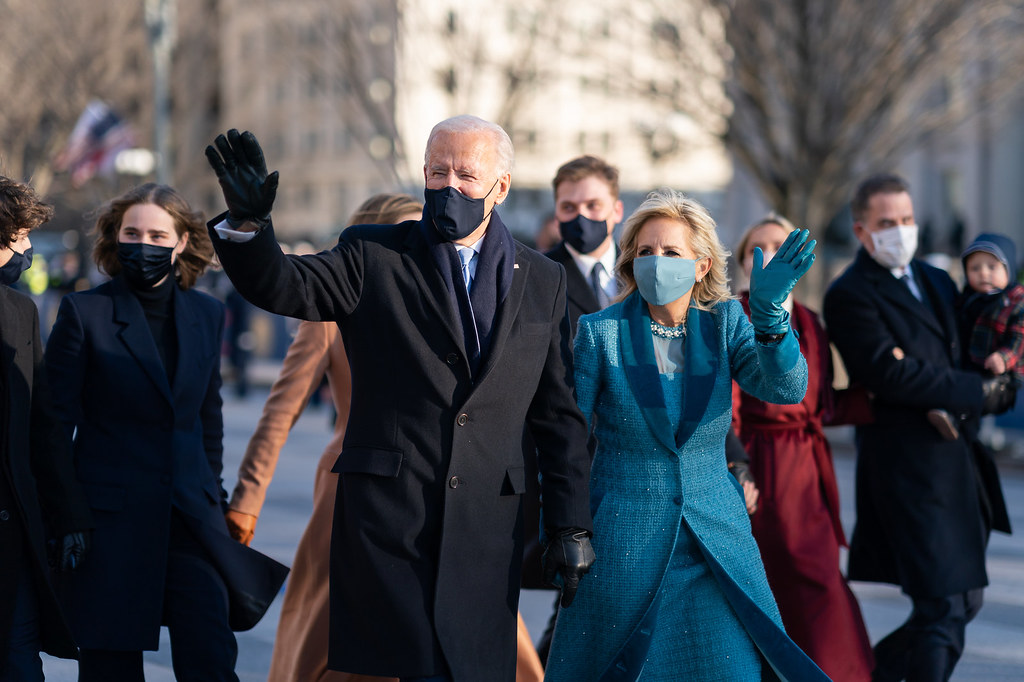 On a brisk winter’s day in January, the 46th president, Joe Biden, was sworn into office. Standing at his side in turquoise was our new First Lady, Dr. Jill Biden. Her impeccably tailored tweed coat is a Markarian original designed by Alexandra O’Neill, who also created its matching ocean-colored dress. O’Neill founded the luxury womenswear label in 2017 with the idea of combining celestial romanticism and timeless designs that maintain sustainability. Dr. Biden’s ensemble was designed and produced by O’Neill and her team in New York City’s Garment District. It is a striking, beautiful addition to America’s history of inauguration attire. It also serves as a wonderful example of an applied art (costume design and fashion) working in support of performance art — after all, you could easily say that Dr. Biden was performing on the world stage.

To complete her look, the new First Lady’s stylist paired her Markarian ensemble with a matching mask as well as a pair of leather gloves crafted by another NYC-based design house, Wing & Weft, the last remaining glove maker in the city. In an interview I conducted with company head Katie Sue Nicklos, I learned that Wing & Weft had gloved every First Lady since Jacqueline Kennedy for high-profile events like balls, dinners with the Queen, and, of course, inaugurations. And while business has undoubtedly taken a toll amid COVID – you can read more about how the pandemic has affected NYC’s costume industry as a whole in an upcoming article – the company remains open. Wing & Weft designed three pairs of gloves for Dr. Biden: a turquoise set, a white set for inauguration night, and a light purple set for the previous day. Her blue pair was so popular that the glove maker received many requests for replicas. Unfortunately, the skin used to create that original pair was the only one of its kind, so buyers will have to settle for a similar color.

At the end of a long day filled with photos and ceremony, the First Lady made her final appearance of the night in elegant white attire that conveys a message of unity while also breathing freshness and purity into the scene. Though the camera didn’t capture the embroidered floral details on the coat and gown, designer Gabriela Hearst shows us the snowy ensemble in all its glory on Instagram while further explaining its symbolism.

“The ivory double-breasted cashmere coat, ivory silk wool cady dress with embroidery reflecting the federal flowers from every state and territory of the United States of America and ivory leather gloves” come together to convey the main message of unity. The flowers are “embroidered into the cashmere coat on the hem line in a pattern that rises organically on the side’s seams” while on the dress, “the embroidery is placed on the silk organza neckline and arms.” A peach blossom, the flower of Delaware, is placed at the level of the First Lady’s heart. From there, “all the other flowers branch out.” Just like Dr. Biden’s turquoise inauguration outfit, this look was made entirely in New York City. According to Hearst, each flower took “approximately two to four hours to embroider.”

From soothing yet vibrant turquoise to pure, snowy white, Dr. Biden has communicated her values clearly through the clothing she’s chosen to wear. Unity is her overarching message – her richly colored wrap coat from the Tuesday before the inauguration blends Republican red and Democrat blue into a unified, deep purple. Perhaps even more strongly communicated is the First Lady’s dedication to championing lesser-known American designers’ work. New York-based designer Jonathan Cohen created both her violet coat and matching paneled dress. Through her choices of clothing, she has made clear her investment in up-and-coming American talent. She follows the precedent set by former First Lady Michelle Obama during her eight years holding the title.

At the same time that Dr. Biden supports American designers’ work, she also promotes sustainable fashion – perhaps as support for her husband’s stance on climate change. All three of her inauguration looks were created with sustainability and the environment in mind. The mask she pairs with her purple number comes from a collection of Cohen’s that uses upcycled fabric. The lining of the coat consists of upcycled materials from previous collections. Materials in Dr. Biden’s white gown and coat ensemble were “existing available fabrics”  used to “minimize the impact on the environment,” says Hearst.

Finally, Dr. Biden wants us to see her as the educator she has been for most of her life. In the lining of her white coat is embroidered the Benjamin Franklin quote, “Tell me and I forget. Teach me and I remember. Involve me, and I learn.” A learner as well, she holds both a bachelor’s and a doctoral degree from the University of Delaware, as well as master’s degrees from both West Chester University and Villanova University. After teaching English and Reading in high schools for 13 years while instructing adolescents with emotional disabilities at a psychiatric hospital, she spent another 13 teaching English and writing at Delaware Technical & Community College. Since 2009, she has taught English at Northern Virginia Community College.

Dr. Biden has already made history as the first First Lady to hold a paying job during her husband’s tenure – she views herself as a lifelong educator and has no desire to stop educating.

Even though she is a woman of intellect, I have no doubt that she’ll continue to turn heads with her iconic First Lady fashion.

All photos used for this article have been identified as being free of known restrictions under copyright law, including all related and neighboring rights. Thanks to the photographers for taking these great shots! 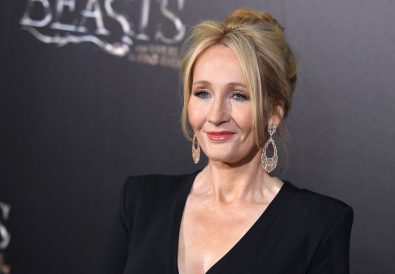 by Roza Melkumyan March 19, 2021
As a member of the FF2 Media team, Roza writes features and reviews and coaches other associates and interns. She joined the team as an intern during her third year of study at New York University. There she individualized her major and studied narrative through a cultural lens and in the mediums of literature, theatre, and film. At school, Roza studied abroad in Florence and London, worked as a Resident Assistant, and workshopped a play she wrote and co-directed. After graduating, she spent six months in Spain teaching English and practicing her Spanish. In 2019, she spent a year in Armenia teaching university English as a Fulbright scholar. She has continued to live in Armenia, and loves every second of it. Her love of film has only grown over the years, and she is dedicated to providing the space necessary for female filmmakers to prosper.
Previous Post Next Post