Nathan Englander came to the Harold Washington Library Center on February 27 to read from What Do We Talk About When We Talk About Anne Frank, his latest collection of short stories. As the translator of New American Haggadah, Englander is actually promoting two books right now, and although they are outwardly very different, common threads soon became evident.

Over dinner at the Berghoff, I zeroed in on “Sister Hills.” Neighbors for decades, in war and at peace, two women who live side-by-side in a West Bank settlement make a solemn agreement in a moment of great fear. “More than anything that I’ve ever written, this book has really been a Rorschach Test,” said Englander. “I thought you might be headed there.” Yes he was schmoozing with a woman the same age as the characters in this story, but it turned out we had a deeper connection.

“My father’s Yahrzeit was last week and the Torah reading was Mishpatim,” I said. “So questions of slavery and ownership are fresh on my mind.” “Mishpatim! That was my Bar Mitzvah parashah!” said Englander. “Writing is fraught. The process is crazy. But when I finished ‘Sister Hills,’ I did not sleep that night. I couldn’t. I was so rattled by it.”

Then he became speculative: “Something about doing the Haggadah project gave me the distance to look at my process anew and it allowed me to write more close… You’re making me think now of how memory is formed.”

In the midst of crafting new stories (“I’m going to tell the whole history of West Bank settlement in a single short story.”), Englander had gone back to the Hebrew text of our foundational story, and transformed the opening words of the Haggadah into these English words: “You are blessed, Lord God-of-Us, King of the Cosmos.” Now families all around the world will gather together this Passover and say these words, and this is how memories are formed.

Englander returns to Chicago on April 26 to do an evening program with Israeli author Etgar Keret at Temple Sinai. For tickets, visit: www.ChicagoHumanities.org.

To read Mishpatim (Exodus 21:1 – 24:18) in the JPS Tanakh, visit: http://www.jtsa.edu/PreBuilt/ParashahArchives/jpstext/mishpatim.shtml.

Ellen Cassedy spoke about her new book We Are Here: Memories of the Lithuanian Holocaust at KAM Isaiah Israel in Hyde Park on March 4, and she is returning for a program sponsored by the Balzekas Museum of Lithuanian Culture (near Midway Airport) on April 29.

We Are Here (the title of which is taken from the famous partisan resistance song “Zog Nit Keyn Mol”) records Cassedy’s personal journey to Lithuania, juxtaposing the memories of relatives now living in America against the memories of Christians still living in and around Vilnius.

Although her mother’s Jewish family all fled Lithuania, Cassedy’s father’s family came from Ireland. Did her name, her complexion, and her red-gold hair help disarm people who might have been more guarded in face-to-face conversation with someone as Jewish-looking as I am?

Cassedy’s co-presenter on April 29 will be Ruta Sepetys (author of Between Shades of Gray, a highly-regarded novel about a Lithuanian family’s exile to Siberia during the Soviet era). For tickets, call (773) 582-6500, or visit the museum website: http://www.BalzekasMuseum.org.

Cyndee Schaffer’s book Mollie’s War: The Letters of a WWII WAC in Europe just won first place in the 2012 Royal Dragonfly Contest in the Biography/Autobiography/Memoir category! 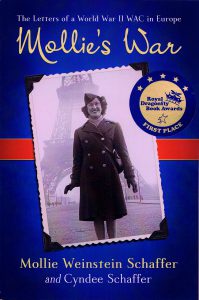 Schaffer has numerous public appearances planned for the Spring, including April 23 at the next Chicago Jewish Authors Literary Series (hosted by Max and Benny’s Restaurant in Northbrook). For more details, visit the “Speaking Engagements” section of her website: www.MolliesWar.com.

This year the 28th annual CLFF brings us Reus from Uruguay. Barrio Reus is the name of a Jewish enclave in Montevideo (now a slum near the waterfront docks), and one of the highlights of the film is a Bar Mitzvah ceremony set in Montevideo’s oldest shul. In some ways Reus is a standard gangster flick, but the acting is excellent and the interfamily dynamics have an intimate, lived-in quality that makes the inevitable deaths truly heart-breaking. To order tickets, visit: http://ChicagoLatinoFilmFestival.org/