“Welcome to my world!  I’ve been through it all… and I feel I am the luckiest woman on the planet.” So says Joan Rivers on the homepage of her new website www.joan.com.

Transforming herself from “Joan Molinsky” (a nice Jewish girl with a Phi Betta Kappa key from Barnard College), Rivers has long been one of the world’s most famous comediennes. Now almost 80 years old, Rivers still maintains an arduous touring schedule. This month, on her way to our North Shore Center for the Performing Arts, she will visit Austin, Fort Worth, San Francisco, Stamford and Tacoma, and after she leaves us, she’ll spend three days in Las Vegas and then swing down to Albuquerque.

So if you’ve never seen this legend live on stage before, head to Skokie on Nov 15. For tickets, call the NSCPA box office at (847) 673-6300 or visit the website: www.NorthShoreCenter.org.

Also recommended is the newly released DVD Joan Rivers: A Piece of Work (lovingly crafted by co-directors Ricki Stern and Annie Sundberg). This intimate look behind the scenes, revealing the method to all her madness, only enhances Rivers’ iconic stature. Brava, Joan! 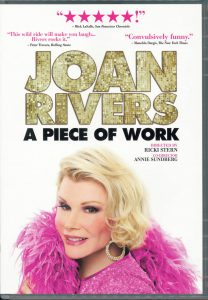 Joan Rivers isn’t the only Jewish Senior still charming audiences everywhere with her supersized personality. It turns out that the indomitable Carol Channing—Broadway’s original “Dolly Levi” of Hello, Dollyfame—is also Jewish. Filmmaker Dori Berinstein reveals this nugget in her splendid new doc Carol Channing: Larger than Life, the most joyous film I saw at this year’s Chicago International Film Festival.

Those of you who read “Tzivi’s Guide to the Chicago International Film Festival” online already know that this wasn’t a particularly good year for films with Jewish content. In “Tzivi’s Guide,” I previewed the four films (two from Israel, one from Europe, and one from “Israel/Palestine”) that were identified by their Jewish content in Cinema/Chicago’s schedule. As always there were a few more, but like in the Carol Channing case, you might not know unless you were actually there to watch them.

For example, this year’s “Festival Centerpiece Presentation” was My Week with Marilyn, in which actors Dougray Scott and Zoe Wanamaker impersonate both Arthur Miller (Marilyn Monroe’s third husband) and Paula Strasberg (Marilyn Monroe’s acting coach) in ways that clearly mark them as Jews. But their efforts don’t amount to much; while Michelle Williams does an excellent job as Marilyn, the film itself isn’t very interesting.

Another heavily-hyped “Special Presentation” was What Love May Bring by Claude Lelouch, who has somehow managed to spin a whole career out of the Oscar he won way back in 1967 for his much-loved film A Man and a Woman. This new film, a totally unconvincing depiction of French life in the 20th Century as a colorful panorama, squeezes an ill-advised trip to Auschwitz into its middle frames. But even without these offensive Jewish elements, the film is still a cacophonous mess.

I went back to see My Best Enemy again with friends who hadn’t seen it yet, and I enjoyed it very much. The distributor, Luxembourg‘s Samsa Film, promotes itself with a stylized logo in the shape of a cockroach (honoring Franz Kafka’s 1915 novella The Metamorphosis). Such cheeky self-awareness earns my trust, and so far this is the only “Holocaust comedy” to actually succeed in a troublesome new genre. My Best Enemy definitely deserves a theatrical release once the festival season ends.

I also attended another screening of The Slut, but even the Q&A with Israeli filmmaker Hagar Ben-Asher failed to convince me. Yes, I connected a few dots the second time that had eluded me the first time, but then knowing more, I liked the film even less.

To read full reviews of all these films (and the others included in “Tzivi’s Guide”), visit my Blog: www.SecondCityTzivi.com.

A new production of Fiddler on the Roof arrives downtown at our Auditorium Theatre for a limited run from Nov 22 to Nov 27. Anyone who has attended one of my Fiddler lectures already knows I believe Fiddler is so well-crafted that there are no “bad” productions, so I always approach each new production with the same basic question: Mah nish tanah ha performance ha zeh? (How is this performance different from all other performances?)

I’ll be heading to a preview performance—in Canada—soon, so by the time this issue of JUF News hits your mailbox, I’ll have the answer posted on my Blog.

Don’t wait too long though, because this is a holiday week. To order your tickets online, visit the Auditorium Theatre’s calendar page: http://AuditoriumTheatre.org. To order tickets by phone, call Ticketmaster’s Fine Arts line: (800) 982-2787.