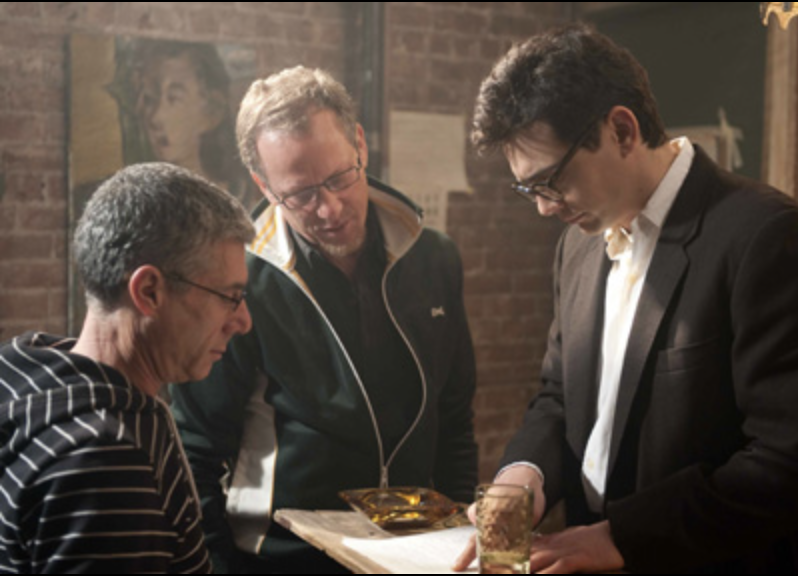 From Jan’s Oct ’10 Spotlight in the JUF NEWS: Howl will be called a BioPic about Allen Ginsberg (played by James Franco), but it’s really a “PoemPic” about the genesis and impact of one of the 20th Century’s most ground-breaking art works. Meeting face-to-face with co-directors Rob Epstein and Jeff Friedman recently, I asked them point blank: “Is Howl a Jewish film?” “No,” quipped Epstein (who won an Oscar in 1984 for his documentary THE TIMES OF HARVEY MILK), “it’s a legal brief from the firm of Ginsberg, Epstein, and Friedman!”

Jan: I love ‘Howl’! You really capture the moment that poetry was transformed—poetry wasn’t just something in a book anymore, suddenly poetry was performance art!

You do so much in this film, but I’m “the lady from the JUF News,” so now I have to ask you: there’s one word I never heard in ‘Howl’; I never heard the word “Jew” in your film. So, nu: why not?

Rob: Well, when I made THE TIMES OF HARVEY MILK, the headline in the Jewish Journal was: “HARVEY MILK film ignores his Jewishness,” so there must be an unconscious theme going on.

Jeffrey: Ginsberg speaks in a prophetic voice that I think of as Jewish, but it’s bigger than Jewish in a way. It’s prophetic.

It wasn’t a conscious choice to make him not Jewish. In fact, one of the reasons we wanted James Franco to play Ginsberg, well, his mother is Jewish, and a lot of the phrasing in Ginsberg’s interview scene is very kind of “New York Jew.” We worked on that with James, worked to get that. So I feel like it is there; it’s just not explicit.

Jan: I was so happy the night Sean Penn won his Best Actor Oscar for ‘Milk’. Part of what he managed to communicate was that this man, Harvey Milk, he had an extra reserve of courage that was part of his Jewishness at that critical moment. And I feel the same way about Ginsberg writing “Howl” and then “Kaddish.”

Say you’re a guy who was a teenager, learning in real time about the Holocaust. Then somebody tries to tell you to shut up, & you say: “Hell, no! No, I am not going to shut up!” When you were working on your screenplay, did you talk about this?

Jeffrey: Well, we were using Ginsberg’s own words. So our Ginsberg interview is constructed from various interviews Ginsberg gave over the course of his life that related to “Howl,” and none of those interviews relating to “Howl” talked about his Jewishness. You know, I don’t talk about my Jewishness.

Rob: I think there’s also something that’s kind of assumed. There’s a familiarity that’s assumed, and I think our position is that was just all implicit. Even though we never met Ginsberg, he was so familiar to us. He was so much a part of that “Jewish experience,” and we both grew up as East Coast Jews.

Jeffrey: Also, there is a definitive a film biography on Allen Ginsberg, THE LIFE AND TIMES OF ALLEN GINSBERG, so we felt like that was the film that really covered his biography, and that what we were dealing with was a specific moment in his life, a specific creative moment, and the themes that went into that particular moment, so that kind of defined the frame of our story and what was inside of that frame.

We’re really proud of the formal adventurousness of our movie. We took a lot of risks and we wanted to do something that would resonate with the poem “Howl” itself and the way the poem was received. So?

Jan: Right, and me, I really think you really succeed! But I’m “the lady from the JUF News,” so what should I tell the mishpokhe? Is ‘Howl’ a Jewish film?

Rob: No, it’s a legal brief from the firm of Ginsberg, Epstein & Friedman! We’re a nice Jewish law firm.

Now, moving on, what is it you really do want the mishpokhe to know?

Jeffrey: I think, more than anything, we want to people to know it’s not “a BioPic.” We’re calling it “a PoemPic.” Rob coined the phrase. We feel like calling it a BioPic is a mischaracterization, and just sets up a kind of formulaic approach, so audiences will be disappointed if they come in expecting that. So we really want them to come in knowing they’re in for a very different kind of ride.

Rob: Yeah, Allen has a book called ‘Illuminated Poems’, and he collaborated with Eric Drooker. They were friends. Eric grew up in the East Village, so he knew Allen as a character as he was growing up. Then he met Allen at the Tompkins Square Riots and they became close. Allen encouraged Eric as an artist, and they started working together, and they published this book of poems. We discovered this in the course of our research, and we met with Eric and the idea [for our animations in ‘Howl’] evolved from there.

Jan: And were you worried about breaking genre boundaries? You’ve always been identified as documentary filmmakers…?

Jeffrey: All that was exciting as it evolved! We were really excited to be working with actors for the first time. We’d never directed actors. We’d never worked in animation. But we were also using a lot of our documentary storytelling skills. So even though we were formally working with different elements, it was not unfamiliar in terms of how we were structuring the story.

Jan: To capture Ginsberg’s moment of performance, to show him actually reading “Howl” in public for the first time. I think it’s all spectacular!

Rob: And that was new, yes, poetry as spoken word performance.

Jan: So Ginsberg is changing the our concept of “performance,” and all this is happening at the same moment in which people are seeing Marlon Brando and the Method actors for the first time?

Jeffrey: Yeah, I think it has to do with authenticity and what that means to us at any given time. When you look at movie acting from the ’40s, it’s very, well, it is “authentic” in its own way, but it also feels very kind of stilted and stylized. And then gradually, over the decades, movie acting got more and more “naturalized.”

Now the whole idea of authenticity has been so bastardized by reality television and even the news that I think people are hungering for something that feels really truthful and authentic, and that’s what Allen Ginsberg was howling for. 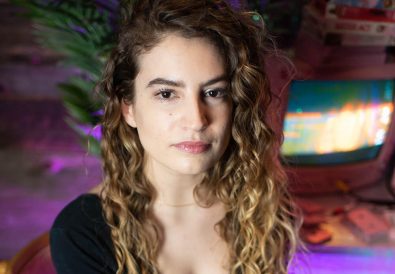 by Jan Lisa Huttner September 30, 2010
Jan Lisa Huttner is a Brooklyn-based arts critic & feminist activist. She is the creative force behind the SWAN Movement—Support Women Artists Now—which has just begun its third phase as International SWANs® (aka iSWANs). In the Jewish world, Jan is best known as the author of two books on Fiddler on the Roof—Tevye’s Daughters and Diamond Fiddler—both of which flow from a strongly feminist POV. She also served as both story consultant and “talking head” on the award-winning documentary Fiddler: A Miracle of Miracles.
Previous Post Next Post